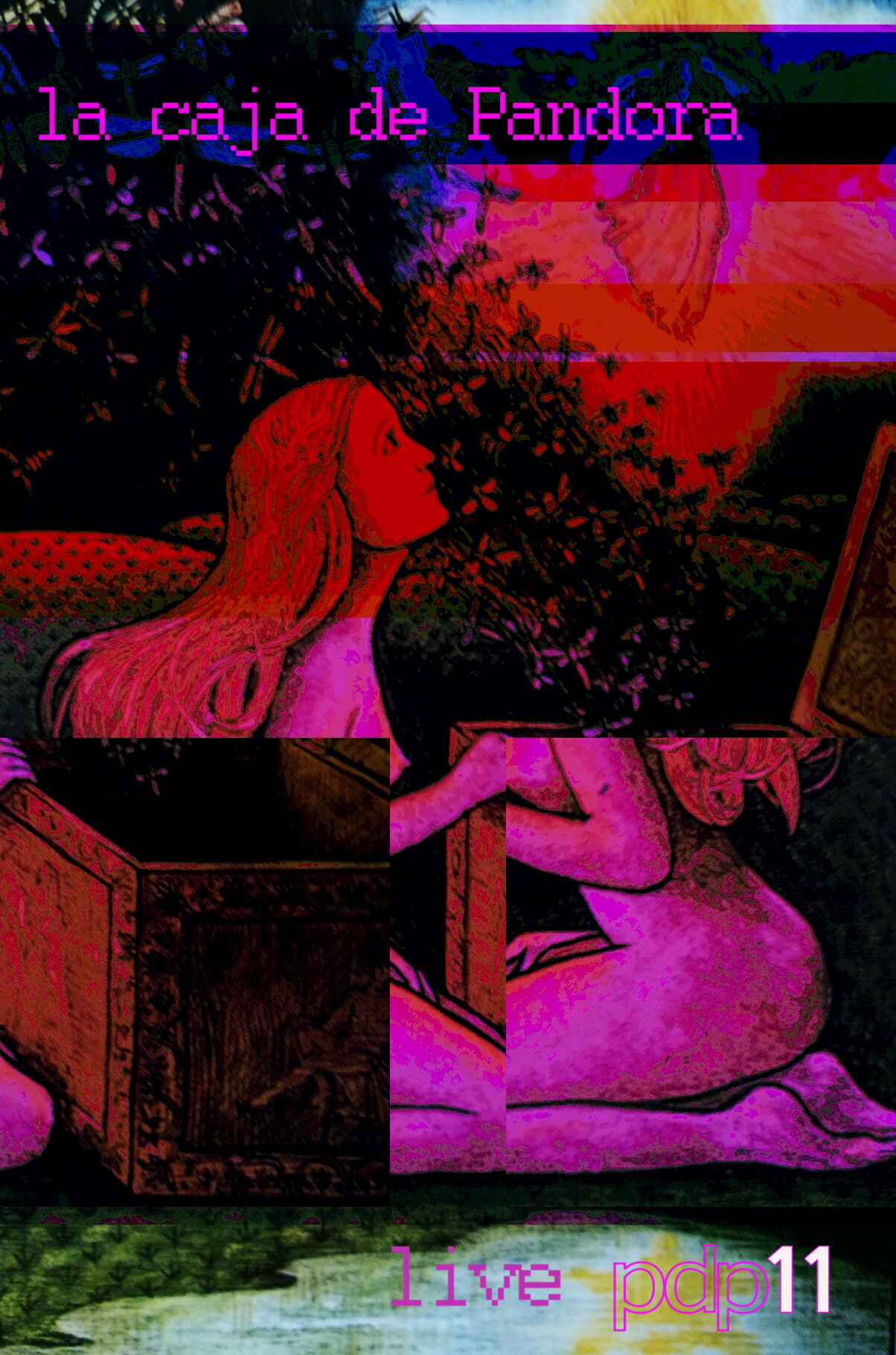 «La Caja de Pandora» is a multisensory project of the PDP11 collective to perform in the second edition of the Intramurs festival in Valencia.
In Greek mythology, Pandora is the first woman, like Eva in the Judeo-Christian religion. Each God gave him a quality such as beauty, grace, persuasion, and manual ability. But Hermes put in his heart the lie and the fallacy. Just as Eva represents human doom. Pandora opened the jar that contained all the evils and all the goodness. By the time he managed to close it, the only thing left was hope so that people did not receive it. According to another tradition, the jug contained all the goods and Zeus gave it to Pandora to be given to Epimetheus on the day of their wedding, but she opened it imprudently, and all the goods escaped and returned to Olympus. As often happens in Greek mythology there are always several versions of myths. However the myth of the Pandora’s box or better the phrase «open the Pandora’s box», we understand it when we want all the good and the bad to come out, although rather the bad.
Returning to this tradition of «opening the Pandora’s box» in the sense of not knowing what we are going to find, the our project reflects on what we do not see but we are attracted to. Why Eva eats the apple, why should Pandora open the box? It is really possible as in the myth that when discovering the interior we receive evils and misfortunes but the human curiosity is like that, insatiable and together with the conservatives who obey, there are the adventurers, pandoras and evas who try to exceed the limits, that despite the difficulties go further because their eagerness for knowledge and new experiences is stronger than all. For us that is the reinterpretation we make of the myth, the opening of the Pandora’s box as something necessary to aerate, to let go, to discover, to experience. As any new adventure is not absent of risks, possible misfortunes and misunderstandings but the entrepreneurial spirit is superior to all that and is ultimately the engine of humanity. The project we present is inspired by these ideas of going further, of experimenting, knowing that sometimes the forces of evil will awaken and that path will possibly be full of traps sometimes deadly.
The historical spaces of the cities contain in their interior the inheritance of all the experiences that day after day, year after year and century after century have happened. The neighborhood of Carmen in the evolution of time has gone through many experiences. Peaceful life and warrior life, brothers together with brothers and brothers faced. His history has left us a legacy of miseries and triumphs. The project that we presented also takes up this diversity of events that, more than anywhere, shelter the historic city centers, which are the local Pandora boxes. Sounds, images, smells and flavors merge over the centuries, dissonant and consonant, attractive and repulsive, beautiful and frightening. Everything fits in Pandora’s box, in the block of the forbidden tree.
The project we presented was a multisensory performance inspired by the myth of Pandora. Basically, it consisted of building a Pandora’s box, where inside we generated sounds, images, smells and tastes. The observer from outside and without having direct access to the box initially, could see, hear and smell through a tube the contents of the box. Finally the box was discovered and all the people who attended tasted the food we were cooking.