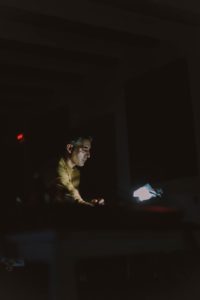 David Pallás Herrero, (Valencia, 1974) Born in the heart of a bakery family in the neighborhood of Carmen, one of the reasons for his passion for the artisan product, the cuisine and the Carmen neighborhood are so latent.

Formed in design and dedicated for ten years to the world of decoration, participating in projects of diverse nature at a national level in cities such as Madrid and Barcelona and international sites such as Paris and Frankfurt.

Despite being successful and stable in the world of decoration, David decides to turn his life around and pursue his true passion; the gastronomy.

In 2009, he began his training as a chef at the «Centro de Hostelería y Turismo» of Valencia and then he was sent along with Alejandro Platero to work under the orders of the prestigious Valencian chef Jose Manuel Miguel (Paris 2 Michelin stars). After getting together with Platero the best grades of the study center.

After an enriching experience in the restaurant, the «Submarino» of the  Oceanografic in Valencia,  David is signed by chef Rafa Morales (former head chef of the «Bulli» and right hand of Ferran Adría) to work on his new project at Casino Cirsa Valencia.

David’s artistic interests led him to create and design the culinary / cultural workshop «El Carretero» in the Carmen district in parallel with his cooking work. Where he would developed, together with artists from different disciplines, different events and performances. From 2012 and up to the present, it is part of the pdp11 collective

In the year 2014 David performs a stage in the kitchen of the renowned chef Miquel Ruiz (El Baret de Miquel, Denia) where he learns different techniques and above all a philosophy of dealing with the local product.

David is currently in a training stage conducting gastronomic research trips around the world, collaborating with chef Alejandro Platero (Top Chef) and designing projects where he can transmit his experiences in the world of gastronomy and design,  besides participating in the multidisciplinary projects of the pdp11 collective