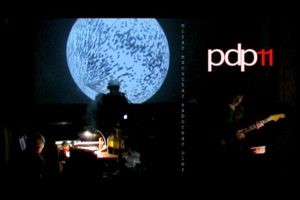 The PDP11 group, founded with the aim of establishing an open platform for research of sound and image at its closest to digital side. Later the sensory range will be expanded to also address culinary arts. Currently the group is formed by: Carlos García Miragall (sound and visuals), Francisco Sanmartin (sound), Maria Jóse Martinez (visual), David Jengibre (flavors and smells) and Deco Nascimento . The main research interests are:

Collective activity arises in the form of open projects. In each of the projects a conceptual model on which structure the contents is defined.

The first project is presented in February 2012 “Where were you when we were also going on?” in the cultural association Pluton. The multisensory project “Batida Tropical” is presented within the International Mostra of Advanced Music and Audiovisual (MIMAA) in October 2012. In May 2013 The project “Stratosphere” is in the Festival Cabañal Portes Obertes of Valencia.

In March 2014 we are invited to participate in the Festival Nits d’Aielo i Art 17th.  In October 2014 we are invited to conduct a performance based on the idea of sound meditation for the Symposium “The mystique of conscious body. Art, nature and contemplation”.  In November 2014 presented the multisensory  project  “La Pobla de les Males Dones”, for the Festival  Intramurs of Valencia. In December 2014 the project “Mareas Vivas” within the “mar_mar” exhibition framed in the “Mostra Viva” festival of Valencia is performed.